THE REPAIRER OF REPUTATIONS

But self-preservation is the first law, and the United States had to look on in helpless sorrow as Germany, Italy, Spain, and Belgium writhed in the throes of anarchy, while Russia, watching from the Caucasus, stooped and bound them one by one.

In the city of New York the summer of 1910 was signalized by the dismantling of the Elevated Railroads. The summer of 1911 will live in the memories of New York people for many a cycle; the Dodge statue was removed in that year. In the following winter began the agitation for the repeal of the laws prohibiting suicide which bore its final fruit in the month of April, 1920, when the first Government Lethal Chamber was opened on Washington Square.

I had walked down that day from Dr. Archer's house on Madison Avenue, where I had been as a mere formality. Ever since that fall from my horse, four years before, I had been troubled at times with pains in the back of my head and neck, but now for months they had been absent, and the doctor sent me away that day saying there was nothing more to be cured in me. It was hardly worth his fee to be told that; I knew it myself. Still I did not grudge him the money. What I minded was the mistake which he made

at first. When they picked me up from the pavement where I lay unconscious, and somebody had mercifully sent a bullet though my horse's head, I was carried to Dr. Archer, and he, pronouncing my brain affected, placed me in his private asylum, where I was obliged to endure treatment for insanity. At last he decided that I was well, and I, knowing that my mind had always been as sound as his, if not sounder, "paid my tuition,"

as he jokingly called it, and left. I told him, smiling, that I would get even with him for his mistake, and he laughed heartily, and asked me to call once in a while. I did so, hoping for a chance to even up accounts, but he gave me none, and I told him I would wait.

The fall from my horse had fortunately left no evil results; on the contrary, it had changed my whole character for the better. From a lazy young man about town, I had become active, energetic, temperate, and, above all -- oh, above all else -- ambitious. There was only one thing which troubled me: I laughed at my own uneasiness, and yet it troubled me.

During my convalescence I had bought and read for the first time "The King in Yellow." I remember after finishing the first act that it occurred to me that I had better stop. I started up and flung the book into the fireplace; the volume struck the barred grate and fell open on the hearth in the fire-light. If I had not caught a glimpse of the opening words in the second act I should never have finished it, but as I stooped to pick it up my eyes became riveted to the open page, and with a cry of terror, or perhaps it was of joy so poignant that I suffered in every nerve,

I snatched the thing from the hearth and crept shaking to my bedroom, where I read it and reread it, and wept and laughed and trembled with a horror which at times assails me yet. 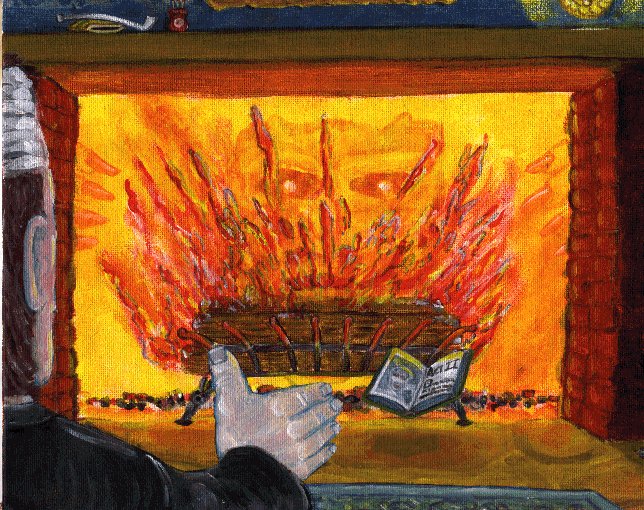 This is the thing that troubles me, for I cannot forget Carcosa, where black stars hang in the heavens, where the shadows of men's thoughts lengthen in the afternoon, when the twin suns sink into the Lake of Hali, and my mind will bear forever the memory of the Pallid Mask. I pray God will curse the writer, as the writer has cursed the world with this beautiful, stupendous creation, terrible in its simplicity, irresistible in its truth -- a world which now trembles before the King in Yellow. When the French government seized the translated copies which had just arrived in Paris, London, of course, became eager to read it. It is well known how the book spread like an infectious disease, from city

to city, from continent to continent, barred out here, confiscated there, denounced by press and pulpit, censured even by the most advanced of literary anarchists. No definite principles had been violated in those wicked pages, no doctrine promulgated, no convictions outraged. It could not be judged by any known standard, yet, although it was acknowledged that the supreme note of art had been struck in "The King in Yellow," all felt that human nature could not bear the strain nor thrive on words in which the essence of purest poison lurked. The very banality and innocence of the first act only allowed the blow to fall afterwards with more awful effect.

It was, I remember, the 13th day of April, 1920, that the first Government Lethal Chamber was established on the south side of Washington Square, between Wooster Street and South Fifth Avenue. The block, which had formerly consisted of a lot of shabby old buildings, used as cafés and restaurants for foreigners, had been acquired by the government in the winter of 1913. The French and Italian cafés and restaurants were torn down; the

whole block enclosed by a gilded iron railing, and converted into a lovely garden, with lawns, flowers, and fountains. In the centre of the garden stood a small, white building, severely classical in architecture, and surrounded by thickets of flowers. Six Ionic columns supported the roof, and the single door was of bronze. A splendid marble group of "the Fates" stood before the door, the work of a young American sculptor, Boris Yvain, who had died in Paris when only twenty-three years old.